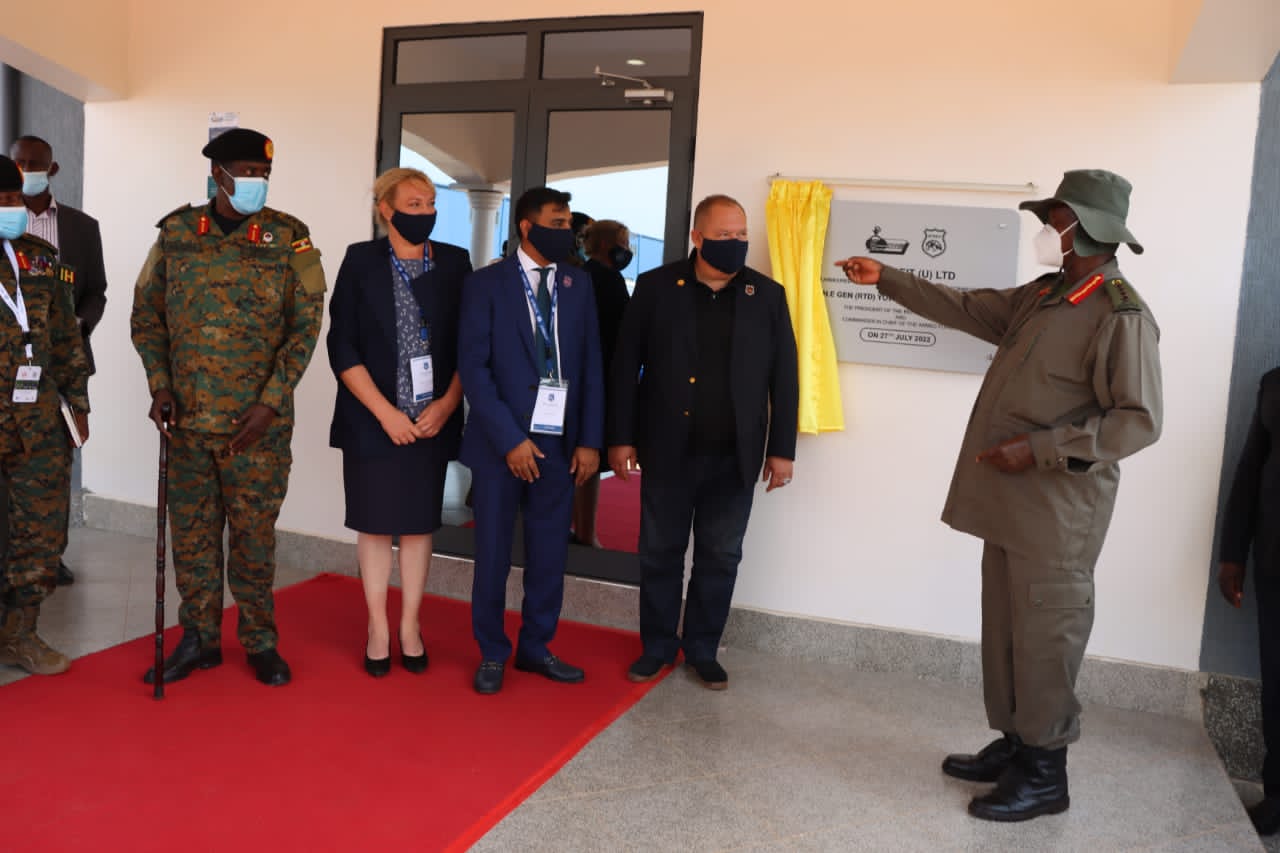 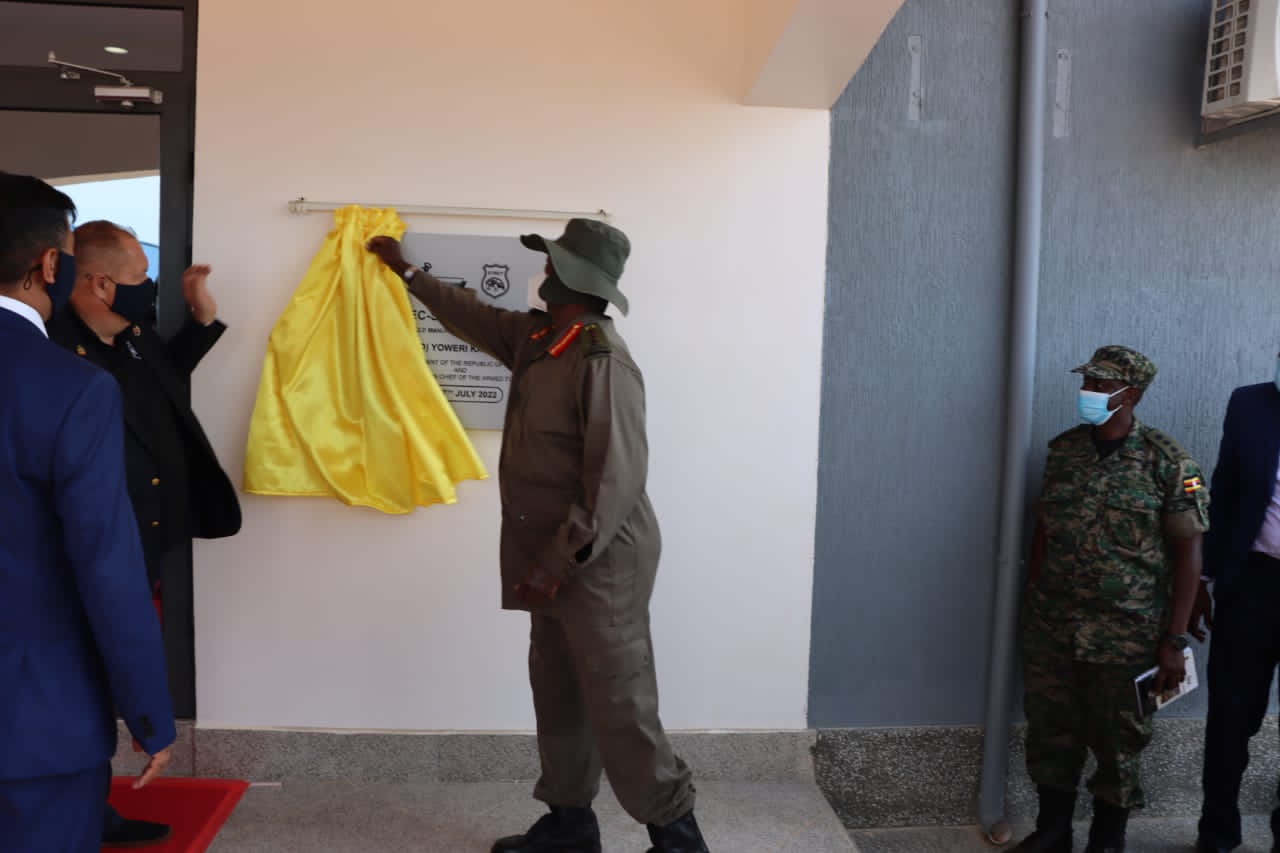 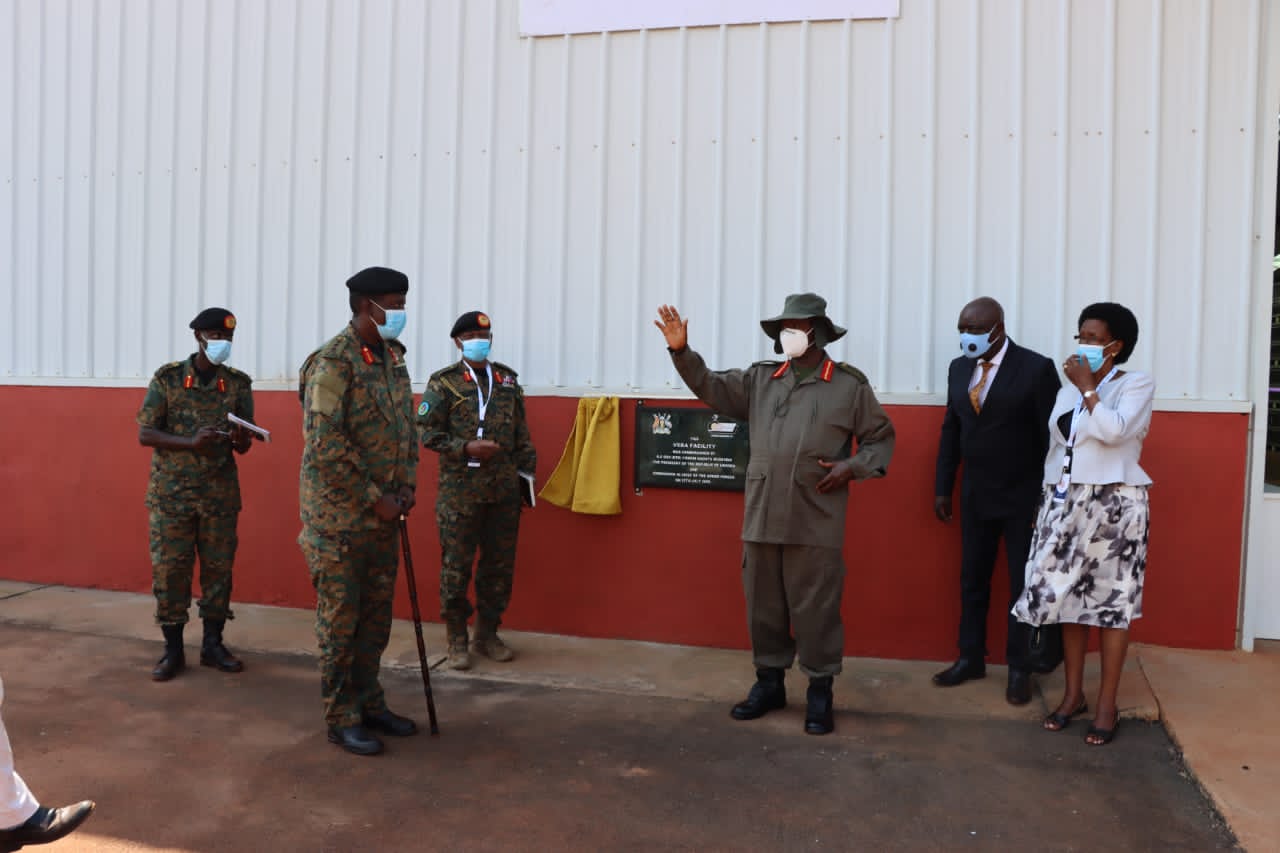 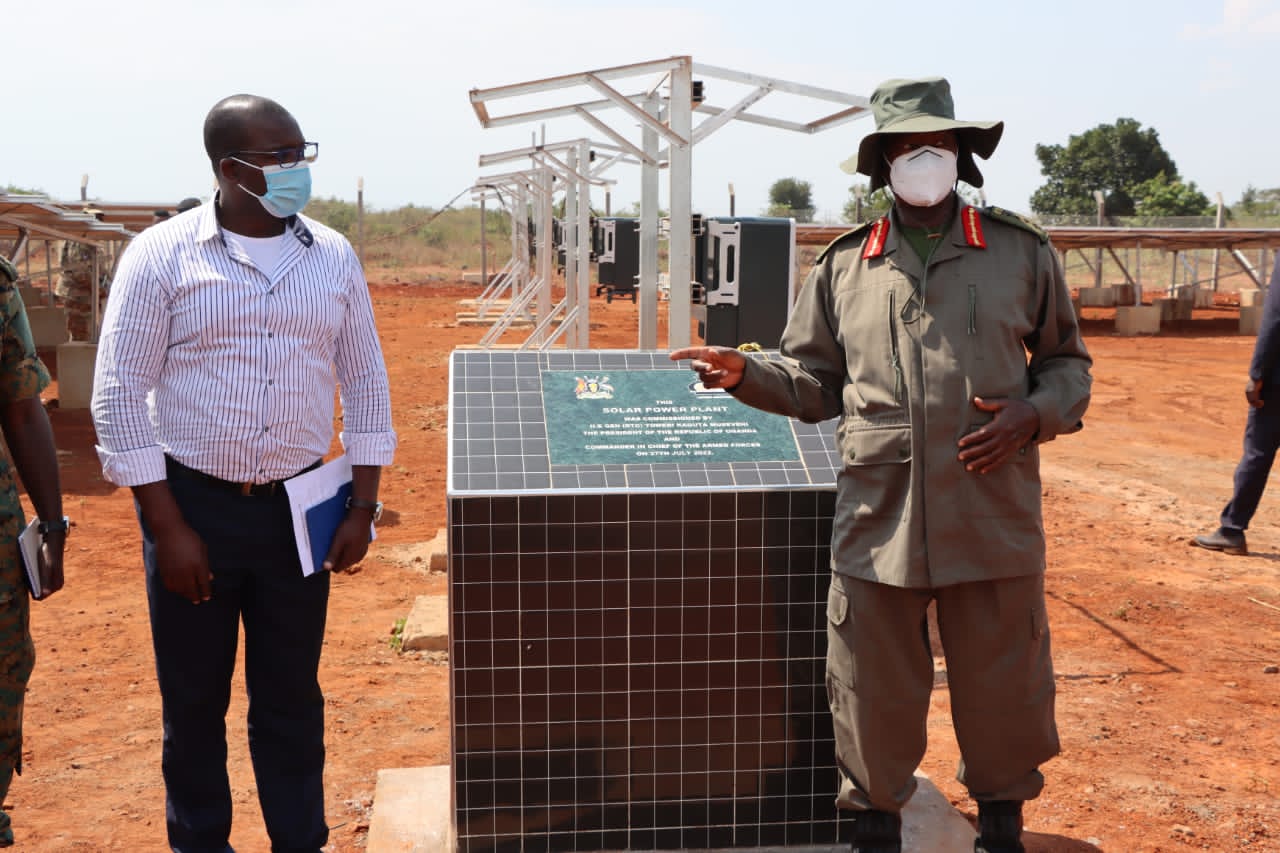 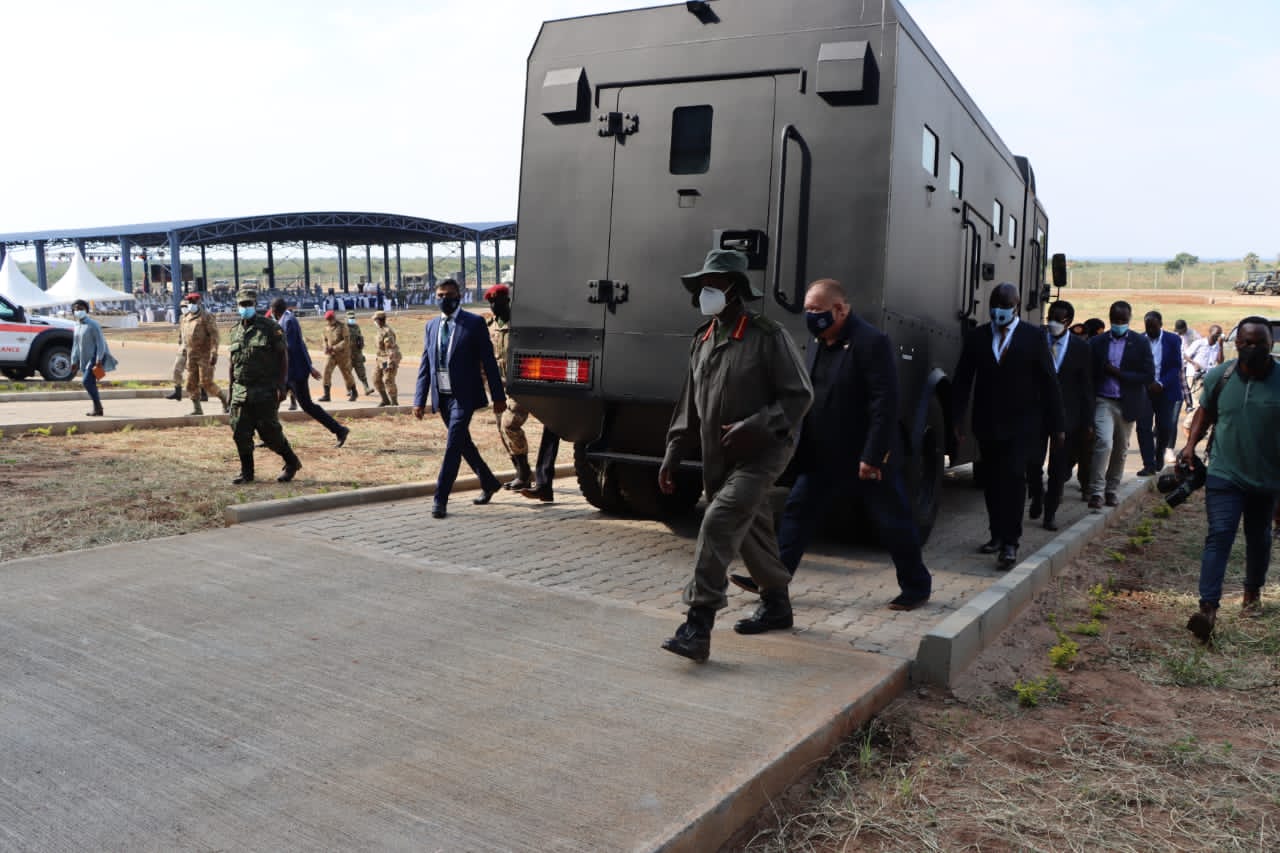 Gen Yoweri K. Museveni thanked the leadership of National Enterprise Corporation (NEC) for always heeding and implementing his advice and observed that by venturing into other areas such as Research and Development, NEC was creating capacity for development of Uganda’s Defence Industry.

The President further observed that the manufacture of armoured vehicles in Uganda will provide services to the rich who want to armour their private vehicles, the banks which want to carry their money safely etc and pledged government’s support to procure some of the armoured vehicles.

The Minister of Defence and Veteran Affairs, Hon Vincent Bamulangaki Sempijja, informed the President that NEC is on steady progress towards self reliance and pledged Ministry ‘s support .

The Chairman-STREIT GROUP, Mr. Guerman Goutorov in his remarks said that the specially designed and constructed bullet-resistant vehicles and vaults will provide secure transportation and protection for government officials, military officers, dignitaries and high profile guests in the country.
He further said the vehicles will help the military in navigating some of the most dangerous places and protect its riders and drivers in nearly all hostile situations.

Gen Wilson Mbadi, the Chief of Defence Forces, thanked the President for his astute guidance on defence capabilities and capacity development towards self reliance.

On his part, Gen James Mugira; the Managing Director of National Enterprise Corporation, Informed His Excellency the President that the military takes Orders and Directives seriously and implements them to the letter and that following the President’s Directives, NEC entered into Joint Venture with STREIT Group for the manufacture and assembly of the armoured vehicles as directed by the President.

Gen Mugira informed His Excellency that as part of capacity building, UPDF technical personnel underwent two year on-job practical training at the STREIT facility in UAE and this has equipped UPDF personnel with requisite skills to manage the facility and indeed has saved UPDF costs of hiring experts as has been the practice in some Projects.

Gen Mugira said that the Company would offer services such as Police vehicles (Anti-riot etc), Armored ambulances, Bullion (cash –in-transit) Vans, Patrol boats to mention but a few. He therefore called upon the Uganda Police, Bank of Uganda, Private Security Organisations, VIPs and CIPs etc to benefit from these services.

He informed His Excellency and the guests that that entire factory was built by NEC Construction, Works and Engineering Co., a subsidiary of NEC engaged in the field of construction, utilizing UPDF Engineers.
This is one of the very many Projects undertaken by NEC Construction Subsidiary which has now built huge capacity and is undertaking major infrastructure Projects in the country.

In order to wean off from the treasury, Gen Mugira further informed the President that NEC has taken a deliberate policy to adopt and embrace among others Business Models such as Joint Ventures. Joint Ventures offer other advantages including shared expenses, technical expertise and know-how, bigger markets, sharing risks, intellectual property gains and many synergy benefits.