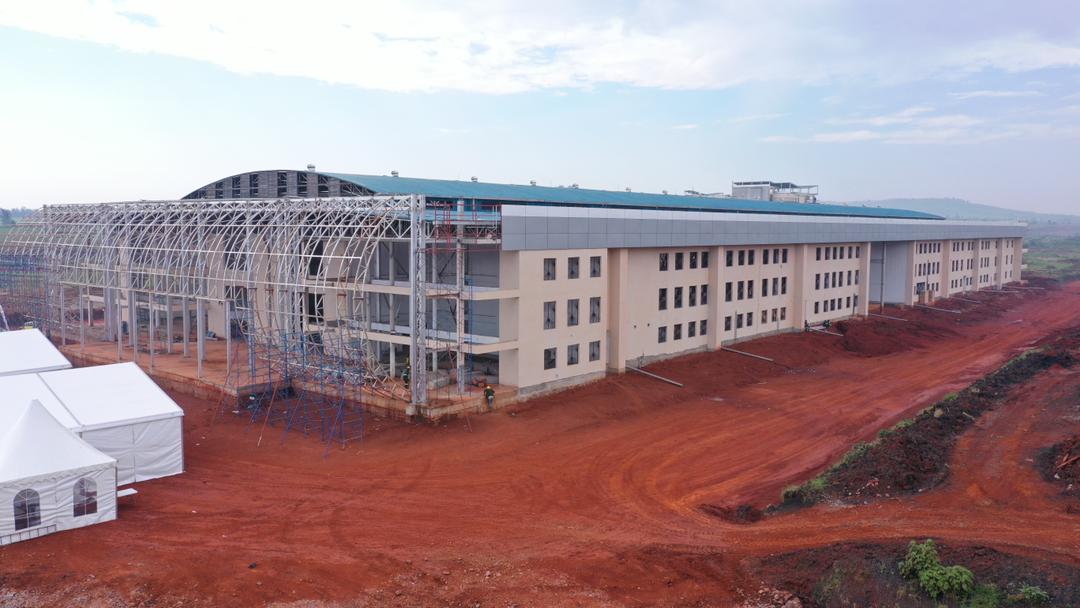 Micheal Emetu2021-08-06T06:35:01+00:00
0 Comments Like: 0
On 4th August, 2021, Hon Dr. Monica Musenero- Minister for Science, Technology and Innovation visited Kiira EV construction site at Jinja Industrial and Business Park on fact finding mission to assess the progress of the project.
Hon Dr. Monica Musenero was accompanied by Hon Eng Hillary Onek-The Minister for Relief, Disaster Preparedness and Refugees who doubles as the Patron of Professional Engineers.
Hon Dr. Monica Musenero was welcomed by Hon Lt Gen James Mugira-Managing Director; National Enterprise Corporation.
Hon Dr. Monica Musenero informed the stakeholders that her visit was to get first hand information about Kiira Ev Factory.
She informed stakeholders that she was greatly impressed with work so far done.
She pledged her support to National Enterprise Corporation/UPDF to become a front liner for government projects.
She underscored the importance of industrialisation to the economy.
She said industrialisation is one of Government top priorities to transform Uganda into a middle income economy through import substitution and export oriented production to enhance household incomes and improve the quality of life of Ugandans.
She informed the stakeholders that sustainable industrialisation of Uganda’s economy is consistent with Uganda’s aspiration and pursuant to the Vision 2040 as outlined in NDP iii and NRM Manifesto where it calls for the promotion of local manufacturing of motor vehicles, establishment of efficient integrated sustainable self and inclusive public transport system and promotion of environmentally friendly transport solutions.
She was concerned that despite the growing demand for vehicles which remains an untapped opportunity for domestic industrialisation user imports continue to dominate the market leading to haemorrhaging of foreign exchange of 450million dollars annually.
On his part, Hon Mugira welcomed the Minister to Kiira Motors start facilities and thanked her for finding time off her busy schedule to come and witness by herself the progress of the construction and added that her visit gave NEC/UPDF encouragement.
He congratulated the Minister on her appointment as Minister for Science,Technology and Innovation by H. E the President of the Republic of Uganda.
He underscored the importance of Science, technology and Innovation and said that we either embrace it or perish as a country.
Through the Minister, Hon Gen Mugira thanked H.E the President for the trust and confidence he put in NEC/UPDF for building not only the capacity to execute works of such magnitude but also of strategic nature-the developments of indigenous automotive motor vehicle industry.
He assured the Minister that NEC/UPDF has the capacity, willingness, commitment and discipline to execute Kiira Motors Project successfully. He once again the promised not to let her down.
He observed that it has now been proven that where Government MDAs engaged NEC/UPDF directly, projects are executed at a low cost without compromising quality and in time.
He requested the Minister to involve NEC in as many Government projects as possible.
He thanked Kiira Motors Corporation leadership for their commitment to the project.
He informed the Minister that NEC has established a good working relationship with KMC even before the completion of the construction of the factory. NEC and KMC have been able to assemble buses at Luwero Industries in Nakasongola.
He thanked NEC/UPDF Engineers for the work well done so far.
He informed the Minister that NEC and &UPDF have made a modest contribution in the war against Covid from the time when NEC airlifted 1m Medical Masks when nobody had started making them from here to now producing our own and then production of oxygen and supplying it to the hospitals.
Present at the function were: Eng Paul Musasizi; ED-KMC, Eng Buhanda- General Manager-NEC Works, different Stakeholders among others